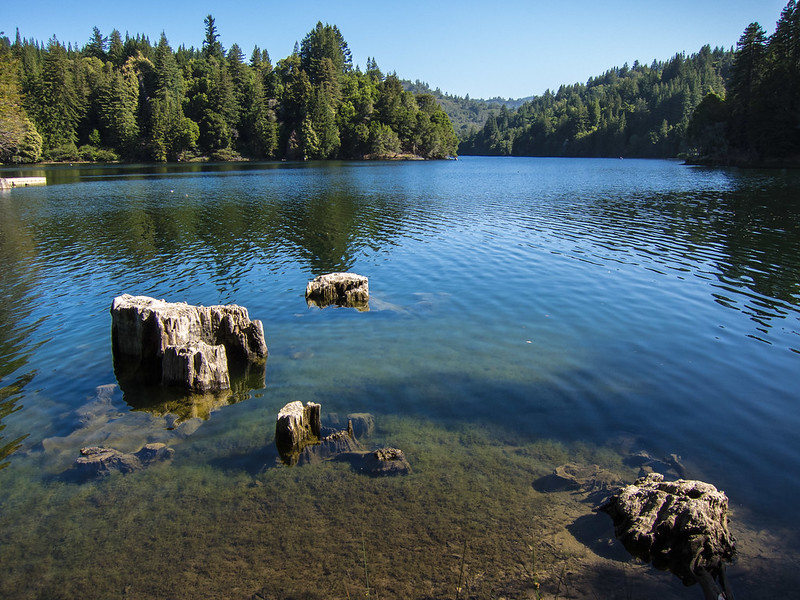 In my September column, “A Perspective on the SLV Water District and the SLV,” I wrote about three distinct arenas in which we need the San Lorenzo Valley Water District (SLVWD) to function effectively: (1) routine business operations, (2) regional water resource management, and (3) community engagement and support. This month I want to dive deeper into the challenges of coordinated regional planning. In particular, I want to call attention to some troubling friction between SLVWD and Santa Cruz.

All of our local water comes to us via rainfall which either runs off into creeks, seeps into the ground, or evaporates (sometimes after being sucked up into plants). The water for our homes and businesses comes either from surface water (creeks for the SLVWD, and the San Lorenzo River for Santa Cruz) or groundwater (which is pumped from wells for the SLVWD and Scotts Valley). Alternatively, this water can be stored in reservoirs like Loch Lomond, which holds San Lorenzo River water pumped up from Felton by Santa Cruz. In principle, we can also store water underground by pumping surplus water into groundwater aquifers. Scotts Valley and Santa Cruz are investigating this approach to store treated wastewater for reuse.

SLVWD is fortunate in having a sufficient supply of local water to meet our needs for the foreseeable future (even in the face of drought), but Scotts Valley and, especially, Santa Cruz are facing significant challenges. This is why they are interested in potentially stockpiling treated wastewater, and it is also why all three water districts have, in recent years, dramatically intensified their commitment to coordinating management of our shared water supply. This regional planning is a good thing, but it is also inherently challenging because SLVWD has different needs, and far more limited technical and financial resources, than Santa Cruz.

A useful way of thinking about optimal water resource management is to picture it resting on three distinct pillars: (1) surface water, (2) groundwater, and (3) efficient use (and reuse) of the available water supply.  Our region already excels in water conservation, but we can stretch our available supply even further in the future with continued improvements in conservation, with reduction in leakage throughout our systems, and with reuse of treated wastewater.  Meanwhile, we always want to limit our use of groundwater to the rate at which the supply is naturally replenished.  This leaves surface water as our other key opportunity for improvement (because excess surface water simply ends up in the Pacific Ocean, particularly during the winter).  However, there are also some long-standing constraints on surface water use that complicate things a bit.

Both the San Lorenzo River and Fall Creek are subject to (seasonal) minimum flow requirements established by the state Department of Fish and Wildlife to protect the fish in these streams. In addition, there are limits on how and where surface water can be used. For example, SLVWD typically has a surplus of surface water (from Fall Creek and creeks further north) during the wet winter months, so it makes sense to redistribute this water to more southern parts of the SLVWD system that are otherwise entirely dependent on groundwater. “Resting” wells in this fashion reduces groundwater depletion and also benefits fish and riparian environments in local creeks that are themselves partly fed by groundwater.

This beneficial redistribution of surface water is part of what is technically known as “conjunctive use” (the coordinated management of surface water and groundwater supplies). SLVWD is currently making good use of this redistribution (for example, it only began drawing water from its wells in June this year) but only because it is operating under an “emergency use” exception to the state’s default constraints on where surface water can be used. This exception was issued in the aftermath of the August 2020 CZU Fire, but it will presumably expire once the damage to SLVWD’s supply pipelines has been resolved.

To routinely engage in conjunctive use, SLVWD applied to the state Water Resources Board in 2021 for permanent authorization to move water around more widely. Unexpectedly, however, Santa Cruz spent a considerable sum of money to file a petition demanding that SLVWD engage in a more detailed (and substantially more expensive) assessment of potential conjunctive use impacts. Santa Cruz takes water from the San Lorenzo River in Felton and also downstream, but SLVWD’s use of surface water only minimally affects the San Lorenzo River flow (particularly since much of the SLVWD water ultimately goes into septic systems that augment groundwater and subsurface flow to creeks).

Another component of SLVWD’s Conjunctive Use Plan involves making use of Loch Lomond water to substantially reduce groundwater use. SLVWD is contractually entitled to a modest annual allotment from Loch Lomond, but it doesn’t have an actual contract with Santa Cruz that specifies a price for this. Also, SLVWD currently lacks the infrastructure to physically access this water supply, and it may ultimately be more cost-effective to buy an equivalent quantity of treated water directly from Santa Cruz. Unfortunately, the Santa Cruz petition raised unanticipated objections to this part of SLVWD’s conjunctive use plan as well.

This is an instance of regional planning not working as well as it should.  In principle, our region has multiple governing bodies with the ability to promote more collaborative planning. The state Sustainable Groundwater Management Act of 2014 led to the establishment of the Santa Margarita Groundwater Agency with three member agencies (SLVWD, Scotts Valley Water District, and Santa Cruz County) responsible for developing a long-term plan for sustaining the groundwater underlying the San Lorenzo Valley. The groundwater agency submitted its plan this past January and is continuing to meet and pursue next steps. Santa Cruz County also has a Water Advisory Commission which provides guidance to the Board of Supervisors on water-related issues.

In practice, our regional collaboration is currently a little lopsided, and SLVWD has been saddled with unnecessary expenses. The underlying issue is that the City of Santa Cruz is naturally most urgently concerned with its own future needs, and this influences the County’s thinking as well. Moving forward, it will be helpful if SLVWD can invest in enhancing its own staff expertise in this arena. However, valley residents can also urge the County to be more supportive of SLVWD and more active in promoting equitable treatment of all participating entities.

Mark Dolson is a member of the local citizens’ group Friends of San Lorenzo Valley Water (FSLVW), but he is writing here as a private citizen. FSLVW articles, initiatives, and Board meeting summaries are available online at: friendsofsanlorenzovalleywater.org.

Featured photo of Loch Lomond in Felton California by donjd2 on visualhunt.com