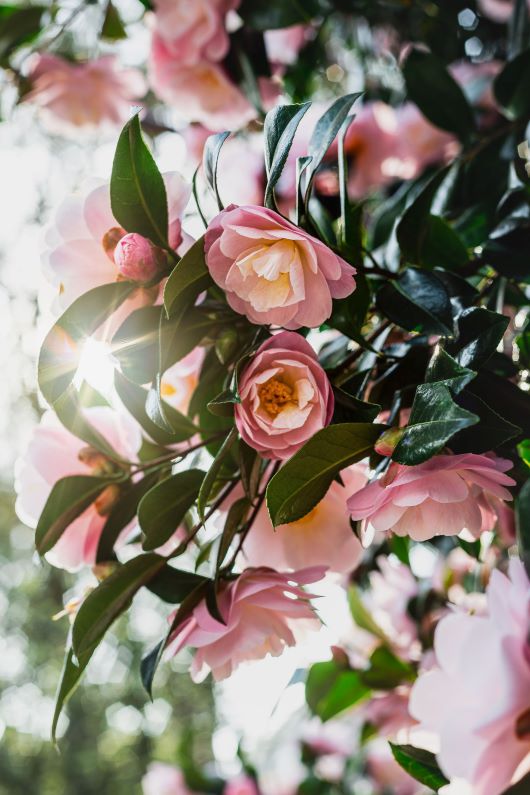 December is upon us and with it, the hot-colored Holiday blooms of Amaryllis. These bulbs are often stashed in a cool, dark spot and potted in October or November. Those from in the Southern Hemisphere will flower this month, and February and March, for bulbs from the Northern Hemisphere (often the Netherlands). December blooming buds should be open or about to, right now. Dozens of color choices, many with “veins” of darker shades, are available. Put them in a well-lit window (but not hot afternoon sun) and enjoy the bold splashes of red against the gray of December.

Camellias own the season, although, depending on variety, you may see blooms through March. These shrubs are happiest in a partially shady spot, in well-drained soil, with 8 to 10 feet of room atop and to the sides, to mature. Many Camellias are so prolific and bloom time is so long, that removing spent (brown) blooms can become a significant seasonal garden chore. Which is fine, but they can form a dense, mushy carpet, so I prefer to remove and compost them. Who knows how many Camellias are now available in the nursery trade? New ones seem to arrive every year and old stalwarts continue to sell. Camellia sasanqua is a better choice for those with limited space. It’s more of a small to medium shrub, produces many more, smaller blooms and will do reasonably well as a pot subject, at least for several years. C Sasanqua has already started blooming and should continue through December.  Camellia japonica is a small tree when mature, produces fewer, larger blossoms and probably should not languish in a pot for too long. C Japonica will bloom a bit later than C sasanqua. Both can be shaped with regular Summer pruning, although the more vigorous C Japonica will still strain to achieve its normal, tree-like growth habit. Bloom color choices among both types range from pure white to pink, to magenta, to fire engine red and with a few the dark red varieties. There are rare yellow Camellias available, but they are not frost-tolerant and thus won’t thrive in many SLV gardens.

Care of Camellias is easy. Plant in slightly acid soil or potting mix. Apply acid fertilizer sparingly, in Summer or early Fall, prior to flowering. While establishing, watering should be moderate. Camellias are not exactly drought-tolerant, but once established, infrequent Summer waterings are fine. When the peak temperature is 110 F for 5 days in a row, however, all bets are off.  Looks like we are going to get this kind of brutal heat wave at least once every Summer in the SLV, from now on. I spent the August heat wave watering almost everything, almost every day. It’s enough to make you tear everything out and replace with gravel, cactus, and yucca! I almost certainly never will, however. I love Asian gardens and while I have not attempted to create one, the Asian influence is everywhere in my garden. Japanese Maples, False cypress, bamboo, irises, and other foundational Asian garden plants, including Camellia, form the skeleton of my garden. Our newest Camellia is up on the deck in a traditional Chinese-style, jade-colored, “pickle” pot” (top rim is narrower than the midsection of the pot). It’s in the only spot on the property that gets morning sun and afternoon shade.

You should start seeing Helleborus blossoms in December. Manzanita is budding and will bloom starting in January. Rosemary, undaunted by the vicissitudes of Winter, is flowering now or will be soon. Sweet peas, crusted with frost now, will be covered with brilliant blossoms in April. In warmer areas, Correa (Australian fuchsia) is blooming now, as are Calendula, Violas, Iceland poppies, and Dianthus. In the vegetable garden, Fall brassicas (cabbage, cauliflower, broccoli, etc) are untroubled by frost and may be ready for harvest soon. You can still plant onion and garlic sets right now, for Summer harvest.