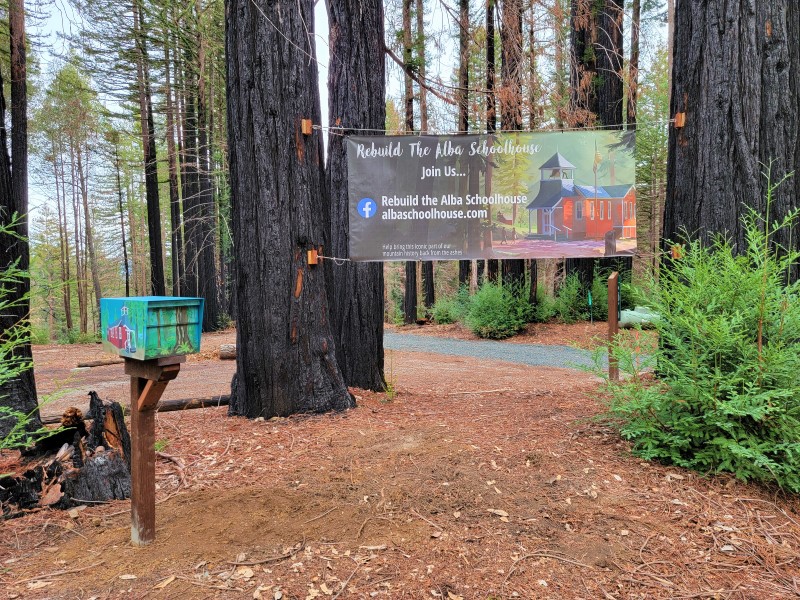 It’s full steam ahead for rebuilding the historic Alba Schoolhouse in Ben Lomond, which was destroyed in the 2020 CZU fire. Last August, the San Lorenzo Valley Unified School District Board of Trustees voted unanimously to replace the structure, which has served as a school, a library, and most recently as a community center for the mountain neighborhood that borders the steep twisty stretch of Alba Road that connects Highway 9 in Ben Lomond to Empire Grade Road at the ridgeline of the Santa Cruz Mountains.

Now, Dan Arndt, Director of Maintenance Operations at the school district is managing the district’s role in the project, and an architect has been selected. The rebuild effort, led by Lindsay Speth and a group of community members, is applying for a non-competitive “special district” grant from California State Parks to complete grounds work that is not included in the replacement of the building. In the grant application, the team will specify any landscaping and paving projects, and the proposed addition of picnic tables and other public service improvements. Speth said, “Because our district is so tiny, the funds actually go pretty far.” The replacement building is covered by insurance and will remain within the footprint of the original with updates according to Santa Cruz County code.

The rebuild team held a fundraising potluck last summer at the nearby Sequoia Retreat Center, which escaped the fire, and Speth said there are plans to host community get-togethers more frequently in 2022. “It’s a meaningful experience that we had…we don’t have time where everybody just comes together. Everyone brings a different piece to the story.”

In December the group held a volunteer work party to continue to remove fire damaged trees and clear brush. “We were able to plant daffodils for springtime,” Speth said, “and take down quite a few dead tanoaks.” They installed address signs and a new mailbox hand painted by local artist Fern Meadow Quinn. “We definitely have more work to do, particularly with all the dead trees we took down, but it looks so great and every bit someone does makes it just a bit better than it was.”

Stay up to date by joining the Rebuild Alba Schoolhouse Facebook group. To volunteer for the next work party, send email to: albarecandparksdistrict@gmail.com