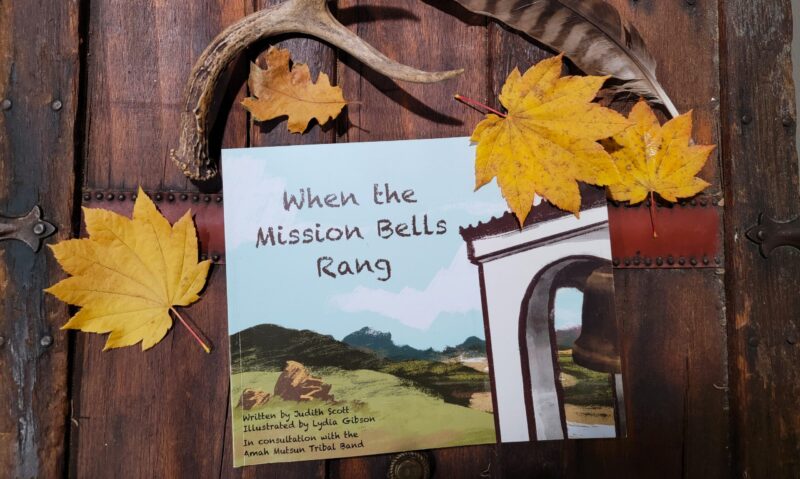 A new book is available at the San Lorenzo Valley Museum: “When the Mission Bells Rang” by Dr. Judith Scott, illustrated by Lydia Gibson and in consultation with the Amah Mutsun Tribal Band. Written for children as a teaching aid and intended for all ages to think about and talk about, the book tells a tale of resistance and resilience.

Author Dr. Scott is a retired professor from the Education Department at UC Santa Cruz and a member of the Cherokee Nation. Produced under the auspices of the Critical Mission Studies Project, a UCSC Humanities Lab program, the book illustrates through imagined fable the establishment of Mission Santa Cruz in the late 1700s as the native animals and the local tribes of Awawas and Amah Mutsun might have perceived it. “It tells that untold tale about the Missions,” Scott said. “It’s kind of a gentle way to tell children that the natives were held captive. It’s hard to talk about these sorts of things. A story is an amazing vehicle for telling these hard truths.”

The story unfolds as the Mission bells are rung, a shrill, metallic cacophony disturbing the natural cadence of the salt sea breezes, the swish of swaying grasses and the whisper of bending forests of redwood and oak, and the steady pulse of the waves against the shore. The bells set the rhythm of life for those who dwell within and nearby the Mission. They ring throughout the day: time to wake, time for meals, time to work, time to worship, time to rest; and to announce visitors or alert danger.

The Council of the Animals struggle against this disruption of their habitat and peaceful way of life and attempt to communicate with the Mission dwellers. The newcomers won’t heed Hummingbird, whose gentle voice conveying the animals’ distress is ignored. Bear approaches the missionaries with urgency, but the settlers are alarmed and shoot their rifles and ring the bells even more. Sparrow tries next. Perhaps by building nests inside the bells the clappers will be silenced. But the native materials have no way to attach to the cold, unyielding casting. Mouse and her sisters gnaw at the ropes that the missionaries pull to ring the bells and are successful…until new ropes are made.

Spanish settlement and the Missions of California are a reminder of a painful history for many indigenous people. In just a few words and supported by touchingly simple yet emotionally lush imagery, the story strikes a place in the heart that resonates with its own timbre.

“When the Mission Bells Rang” concludes with a brief history of the people who once occupied the Monterey Bay area, the Mutsun, the Awaswas, and the Rumsen. The animals in the story are named according to the Mutsun-to-English dictionary based on historical documents.

An important and beautiful gift, purchase a hard copy at the SLV Museum Grace Episcopal Gallery, 12547 Highway 9, Boulder Creek, at the Museum of Natural History, the MAH, Bookshop Santa Cruz, and the Santa Cruz Mission Bookshop. You can also download: whenthemissionbellsrang.weebly.com