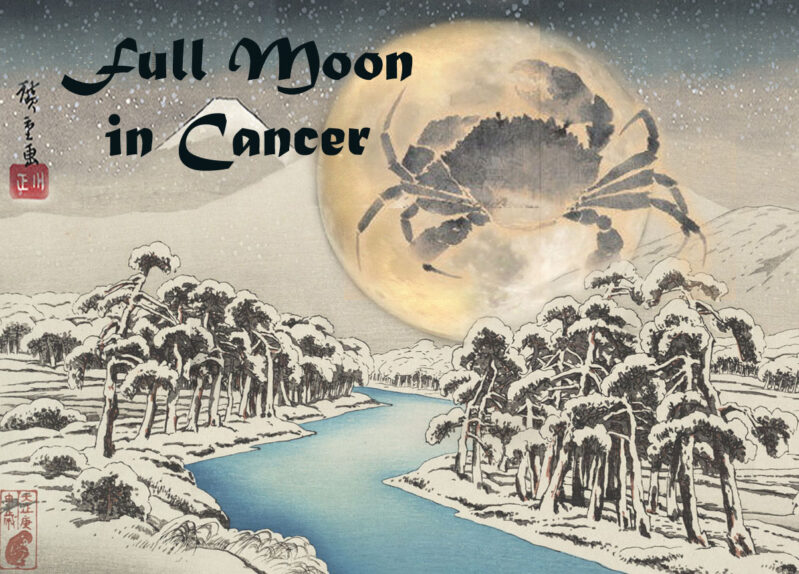 Happy New Year, stargazers! This month I will briefly cover January’s astrological events and then share a quick look into the year ahead. We see some big shifts in the cosmic weather in 2023. Several major planetary players enter different signs, contributing to a general cosmic feel quite distinct from 2022.

The Sun and Mercury are both in Capricorn at the start of the month. Mercury is retrograde until January 18th when the planet of perception and communication stations direct at 8º08’ Capricorn. I must say this is an odd start to the new year because the retrograde motion along with Mars, also still retrograde in Gemini, makes the beginning of 2023 resemble a Janus figure. Two faces; one looks ahead, the other back. Just think of the Jerry Garcia/Robert Hunter song “Gomorrah.” The lyrics “Because she looked behind her…” echoing the Biblical story of Lot’s wife. If you look behind you, you might just end up a pillar of salt!

Seriously, best to use the Mercury retrograde period to reevaluate and reassess your Capricorn strategy. Write out your goals, meditate upon them and reflect. After mid-month, you can start to bring them forward. We have all been learning a lot under Mars retrograde since last fall. Mars stations direct January 12th at 8º08’ Gemini. All the word play and confusion over the past few months may start to make sense, as long as we stay open to fresh perspectives and diverse ways of seeing ahead.

On January 6th, at 3:07 pm, the Full Moon in Cancer, 16º22’, opposes Mercury retrograde while sextiling (60º) Uranus in Taurus. Uranus, the planet of sudden awakenings, radical change and revolution, is retrograde, lingering at mid-Taurus. Slowing down all month, Uranus stations direct later on January 22nd. Meanwhile, the Full Moon early in the month is a time for self-care, home and family, only Uranus says “wake up!” What needs to change in my stubborn old routines to make my inner life and love nest a true comfort? One that is secure, warm and loving, just right for me?

Sun enters Aquarius on January 20th, just before the New Moon, at 1º33’ of the sign of the water-bearer, January 21st at 12:53 PM Pacific time. This New Moon sextiles Jupiter, a good time to open your mind to new ideas and radical ways of seeing things. Where is that quirky, innovative genius in you and how can you strive for true authentic freedom in a way that creates the kind of change we all sorely need? “You say you want a revolution….” Well, you know, you have to change your mind. Be that authentic you.

Here’s a quick glance at what 2023 holds in store. March 7th, Saturn, the great “taskmaster,” leaves Aquarius, one of the signs the planet rules, and enters Pisces, a very different, emotional, watery and sensitive sign. Piscean energy can be about our psychic boundaries and Saturn may bring a time of limitations or challenges. The high road is working hard and having discipline to make our psychic, intuitive gifts or our creative visions in improvisational art and music real and give them structure.

With Saturn in Pisces, there is a tendency to shut down and escape because of the overwhelming feelings we encounter when boundaries dissolve. Look to see where early Pisces falls in your natal chart. Here you may experience endings. Saturn wants you to “mature,” grow into a new pair of “shoes,” so things take effort and patience.

Another big event is Pluto leaving Capricorn and entering Aquarius on March 23rd. Hold on to your seats for a collective ride into a period of more power and innovation expressed through technology, such as more advancement with AI. Personal growth comes through questioning what makes us feel free. A time to “let your freak flag fly!” And an age of air where more personal connections occur in the ethereal plane. Yup, more Zoom calls! By mid-June, slow-moving retrograde Pluto reenters Capricorn, so this short Aquarian taste is just the beginning for the years ahead.

The Moon’s nodes change signs in the summer. North node enters Aries and south node Libra. We are learning to take the initiative and self-actualize. Can we create relationships that truly balance our own needs with those we love? As in the song “Eyes of the World” by Garcia/Hunter, “The heart has its seasons, its evenings, and songs of its own.”

More on these topics in the months ahead! Blessings for a glorious 2023 to all!

Catie Cadge is Dean of the Forrest Center for Evolutionary Astrology. Classes and more information: forrestastrology.center. Read about Catie and her work at caraeveolutionaryastrology.com.