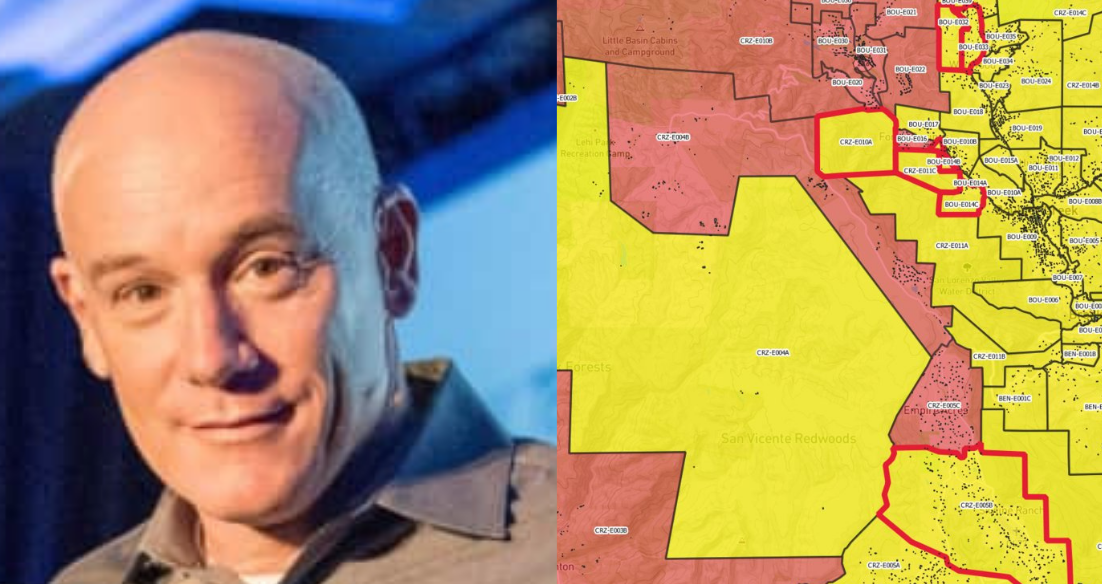 Charlie Crocker is the co-founder and CEO at Zonehaven, the evacuation planning and support tool that kept us glued to our smartphones during the CZU Complex Fire as communities evacuated and then repopulated their neighborhoods. The Santa Cruz Mountains will again rely on the app as we move into the rainy months and the potential for mudslides and debris flow becomes imminent.

“We’re born from forward thinking folks in the first responder community,” Crocker said. The dream started two-and-a-half years ago and had only been used in trials for about 18 months before the fire broke out mid-August. “We weren’t even planning to launch the site for another two or three months.” Suddenly Zonehaven became a crucial communication and organization tool for emergency agencies and for those who needed to move safely through disaster areas. Zonehaven network analysis algorithms identify key intersections and choke points to avoid gridlock. “You have no idea how many hours were spent in the middle of the night making sure things worked.”

Zonehaven assigns an abbreviation and number for each zone. “You could be anywhere in the state or the country and that would be a unique ID. Like a zip code or an area code,” Crocker says. For instance, BOU-E009 is the area of Boulder Creek near downtown that includes Scopazzi’s restaurant, which is within the “Debris Flow Hazard” zone due to the CZU fire. A pop-up window on the Zonehaven site provides a link to the County of Santa Cruz Fire Recovery website for more information.

“We invented the efficiencies, but many of the ideas are not new,” Crocker says. “Key leaders in OES communities understand their business and what works, that’s what’s helping us to build a tool that works for them.”

Zonehaven technology uses a network of satellites combined with other data to determine how to move people safely in an emergency. Some of this data includes subdivision mapping, the location of streams and railroads, how people get in and out of a location, the estimated amount of fire fuel load, and how people and municipalities have used a region over time. And all this high tech information is combined with local know-how. Crocker says, “Agencies whose teams are familiar with an area know more than we do. Like, there’s a dirt road that doesn’t show on a map, or there’s a gate that could offer another escape route. It’s hyper local knowledge.” And, he says, machine learning is getting better, meaning that Zonehaven technology is able to compile predictive models from all this data more quickly and accurately.

Crocker went to UCSC. “It’s a familiar space for me. That’s one of the most enjoyable parts of my job, knowing my community. I know this, I’ve driven this road a 100 times.” He lived in Santa Cruz for seven years and earned both his bachelor and master’s degrees. “We could bike from our grad student trailer without crossing any roads…it was all backroads and trails. Where you go to college, where you have your first experiences, you’ll always call home,” he says.

In the CZU fire, there were 130 zones under evacuation at once. San Mateo County, Santa Cruz County, and on warning for two days, Santa Clara County. “We haven’t had the time to spend with the community to educate them about their zone. It would have been better to run a know-your-zone campaign last year. But that’s where we’re headed, and we were fortunate that the app was prebuilt. People used it like crazy.”

Fire doesn’t know county boundaries. Zonehaven has created a language to communicate critical information, a proven value in evacuation planning. Soon they will be onboarding additional counties, then they’ll start planning at the state level. “We all live in our virtual worlds, you’re talking about moving real people out of harm’s way. This is get in your car and get the hell out of there, not a video game.”

“We have a journey still ahead of us. We’ll work with the county to see if there is anything that needs to be changed on our end. There’s a lot to unpack. I want to stop time for six months to learn and rebuild from what we learned, then restart time.”