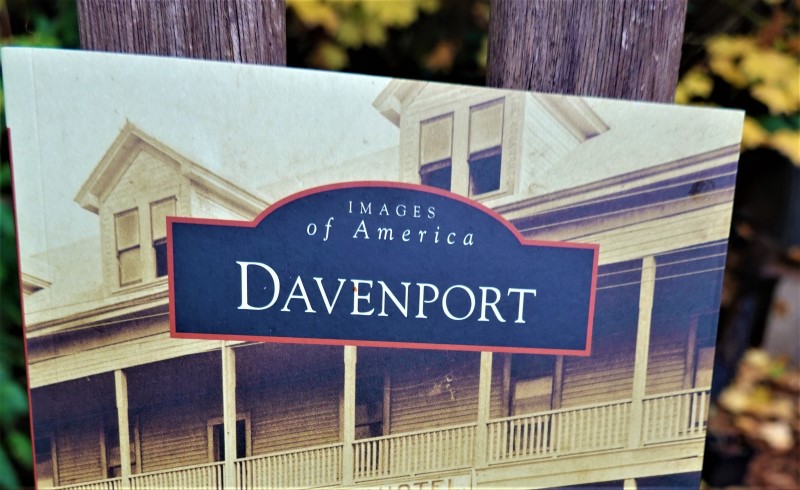 Retired teacher and librarian Alverda Orlando started working on the idea of a book about Davenport when she was in college. Facing a two-unit deficit from graduating and not wanting to have to do too much studying, she said, she took an easy summer course where the professor asked students to write about the history of their hometown. Orlando said she’d write about Davenport, but the professor scoffed and said, “There’s no history over there, you can’t do it.” Nobody had ever written anything about Davenport, Orlando realized. “All most people saw was the dust and the fact that it looked like something out of the deep South.” So she returned home to Davenport to interview her neighbors anyway.

Originally from San Jose, Orlando moved to Bonny Doon at the age of 10. She was 15 when she came to Davenport. “My whole life has been spent in that area,” she said. She taught school in the 1950s, then became a librarian with the Santa Cruz Public Libraries Branciforte branch in 1961. Known as “the unofficial historian of Davenport and the entire North Coast,” Orlando finally retired from managing the Branciforte branch in 1992. But retirement didn’t suit her, she said. So in addition to spending the next ten years as a substitute librarian in the Santa Clara County system, she also became active with the Davenport Resource Service Center and joined a group that began interviewing local seniors about what life was like in Davenport in the old days. You can find the series of oral histories from the group’s interviews in a collection at the Santa Cruz Main Library. From these interviews, and the notes she’d taken in college, a book formed in Orlando’s mind.

Orlando contacted Arcadia Publishing. Then she contacted friend and associate Ed Dickie, a nature photographer based in Davenport. They had all the information, they just didn’t know how to get started. Traci Bliss suggested that they work with Sally Iverson, an author, artist, and programs coordinator with Santa Cruz Museum of Natural History. The team spent nearly a year together compiling their research. Iverson focused on the native Cotoni tribe with assistance from Mark Hylkema, Supervisor of the Cultural Resources Program, Santa Cruz District, who did his thesis on the Davenport native people. She also studied John Davenport’s adventures in Monterey before he came to Davenport Landing. She and Dickie collected archival images and distilled their descriptions.

Orlando, who is now 91, released her book, Davenport, part of the Arcadia Publishing “Images of America” series, in March of 2020.

The Davenport of old was a vibrant town, and the book chronicles the transitions over the generations, from the arts community to what is now the San Vicente Redwoods preserve — vast stretches of rolling hillsides and canyons north of Davenport where Swiss and Italian dairymen immigrated in the 1860s. “The dairies started near Rancho Del Oso and fanned into Davenport Landing,” Orlando said. “Coast Dairies built the town.” There were multiple schools. “They built railroads like they were roller coasters up and down the mountains and from San Francisco,” Dickie said. Other industries included tan oak and lumber. There was whaling, and lime kilns and cement. Bootleggers and a jail. “It’s interesting,” Orlando said, “You go way back in this town and it really has a lot of history, very very rich, crazy history, really, for such a small little town.” She added, “Santa Cruz newspapers talked about it like it was a foreign country. Here’s a part of Santa Cruz that nobody ever talked about, and yet all this stuff was going on.”