In Bonny Doon the Warnella Fire and the Waddell Fire combined to make a firestorm. The fire climbed up into the Santa Cruz Mountains burning most everything in its path. Boomeria, built by the Boomers starting around 1957, survived by the heroic efforts of friends and neighbors.

A colorful Renaissance estate created by Preston Q. Boomer and his San Lorenzo Valley High School physics students over the last 60 years or so, the quirky estate features, among other interesting aspects, a series of catacombs, a science lab, a miniature castle, a working guillotine, swimming pool, and an intimate wooden chapel called “Chapel Royal.” The interior of the chapel is dominated by an historic pipe organ, which has been played by many world-class concert organists over the decades. In July, the Santa Cruz Baroque Festival hosted the Boomeria Organ Extravaganza 2020. According to the event invitation, “The Boomeria Organ itself was a project begun in 1953. In that year Trinity Paris Church (now Trinity Cathedral) in San José replaced its vintage 1879 organ console, which originally had been donated to the church by The Boom’s great grandmother. Boomer rescued the console along with two sets of pipes. Generations of Boomer’s San Lorenzo High School students helped with the building of this massive instrument and its intricate mechanisms, along with assistance from organ builders Bill Reid, John West, and Bill Visscher. The Boomeria organ now features 40 ranks, 2500 pipes, baroque voicing, and mechanical action.”

During the firestorm, The Boom’s son in southern California, Alex, kept a vigilant eye on fire heat maps: “Fire fire everywhere and the little black X is dad’s house. Dad bugged out at 3:00 AM. It’s been a long, weird day watching for news of who burns and who stands.”

Neighbors reported that properties along Empire Grade from Vick to Verde had been lost, but there was no immediate news of Boomeria.

On August 21, the following email was sent to friends, fans, and followers: “Ye Olde Pappy and Trentin talked their way through the police roadblocks today and made their way up to see for themselves what was left of Boomeria. They met up with some Most Heroic Neighbors, who had spent a night and a day saving three homes and Boomeria by cleverly connecting a portable pump through the existing Boomerian fire hose system, chainsawing, and digging, and diverse other heroic deeds. Upon arrival, Trentin went off to help save another home whilst The King surveyed the wreckage (and probably ran the generator to refreeze the freezer and whatnot).” According to the email, many outbuildings such as Tower 1 and the Engine Room with Tower 2 did not survive, but the main house, The Castle, Chapel Royal, and the Baroque pipe organ were saved.

Saved thanks to quick thinking by neighbor Lexie Seath, who set up a portable generator to pump the pool water through hoses on the property. “She also used a chainsaw, axe, shovel, and rake to fight fires throughout the night and next day. She also saved her own home and two others on Verde Drive. When Sir Trentin arrived, they both saved the house above our yard.”

“Much needs to be done to clean up and rebuild,” the email continues, “but nobody was hurt and PQ Le Boom is home and safe! Long Live King Boomer and Boomeria!!”

Read more about the famous Baroque organ at: boomeria.com/tour/organhistory.html 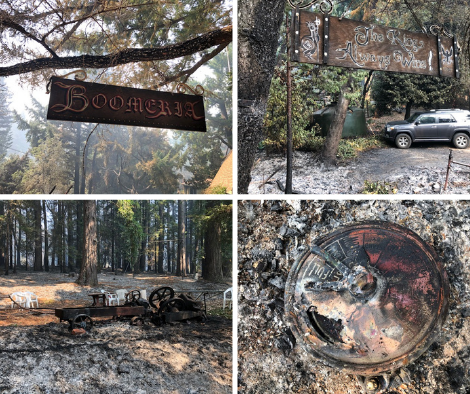