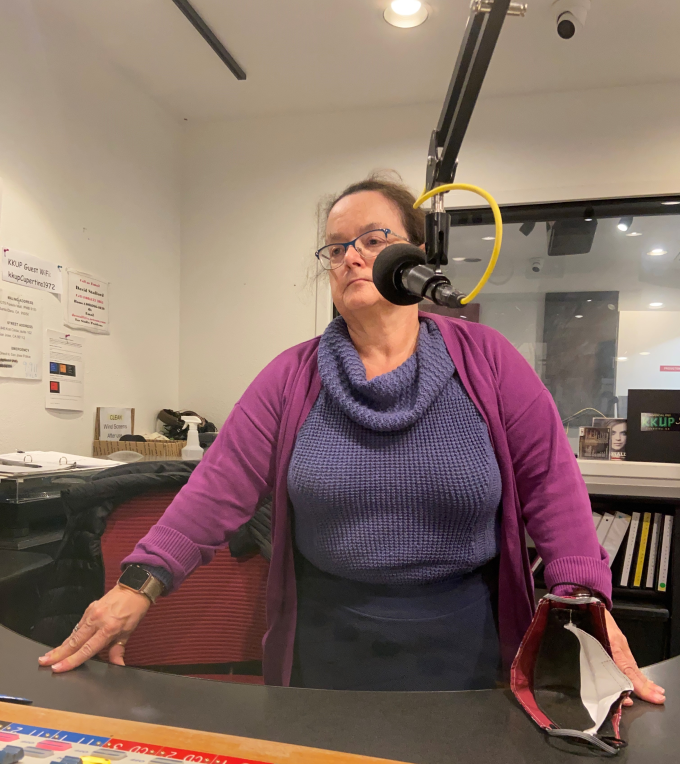 Pure dedication. Nearly every Sunday since the winter of 1989, Boulder Creek’s Laura Testa-Reyes makes the trek over the hill to run the Wimmin’s Music Program on KKUP 91.5 FM in Cupertino. “Laura Testa,” as she is called on-air, is a passionate feminist radio programmer whose inspiration comes from music written and performed by women. She hosts interviews with the movers and shakers who champion women’s issues – artists, authors, politicians, decision-makers locally and nationally.

Testa-Reyes’ musical tastes are based in the folk genre, which, she says, is where “wimmin’s music” came from. In the 1960s, female musicians and activists like Gwen Avery, Bernice Johnson Reagon from the group Sweet Honey in the Rock, and Holly Near broke new ground with proactive messages for social justice and gender equality. The movement, called “second-wave feminism” (the first being the suffrage movement in the mid-19th century), broadened the focus of women’s rights to include equal pay for equal work and reproductive freedom, to name a few. It also brought about changes to divorce and custody law and helped create women’s shelters and relief programs for those suffering domestic violence. Wimmin’s music (or women’s music) as a type of musical expression – “music by women, for women, and about women” – remained popular through the 1980s. When Testa-Reyes joined KKUP, she said, “Women’s music was just at the cusp of being a big thing.” Testa-Reyes’ program pulled from labels such as Redwood Records in Fullerton, California; Seattle-based Yellow Tail Records; Olivia Records out of Washington, D.C.; and Tsunami Records in Spain, labels that helped explode women’s music into the mainstream.

Figuring out her place in the world at Los Angeles City College, Testa-Reyes said she tried cinema, which wasn’t for her, and broadcasting, which she really enjoyed. “I talked to my professor, and he said you’re too smart for this.” So she steered toward journalism and graphic design, keeping radio as a hobby. She moved to the Bay Area and happened upon KKUP during her daily commute. “I was going around the dial, there were kids songs, barbershop, folk, and reggae, every day something different.” She thought, “This is a really funky ass station, I love it!” This was where she first heard the Wimmin’s Music Program. One day the programmer asked over the air if somebody in the community would like to take the show over. Testa-Reyes says, “Of course this isn’t done anymore. Nowadays they make you apply, get an FCC license, and do sub shows, you’d have to earn the spot.” But she wrote to the programmer and said yes.

Testa-Reyes’ creed, openly sharing diverse identities through music and through interviewing, draws her listeners in through the power of words. The reason she still produces the Wimmin’s Music Program at KKUP after 30 years goes beyond wanting to share music that touches the heart. “So much of commercial radio plays the same stuff over and over. There are so many artists out there, if you just play their music you’d be stunned by the messages. That’s why I drive over the hill every week.”

She starts her show with Joan Armatrading’s “All Shapes and Sizes” from the What’s Inside album. Don’t wait to tell someone you love how you feel, the song implores. “Zoe Mulford, Christine Lavin, Dar Williams, Ruthie Foster, Jamie Anderson, Santa Cruz based Pele JuJu, listen to what they have to say,” Testa-Reyes says. “Women’s voices are absolutely amazing. The kind of voices I want to share with people.”

Testa-Reyes also writes short stories and performs traditional English dancing with Seabright Morris. She owns Catalyst Creations West of Boulder Creek and is the layout artist for the San Lorenzo Valley Post newspaper. Listen to the Wimmin’s Music Program on KKUP 91.5 FM Sundays from 11:00 am to 1:00 pm. kkup.org