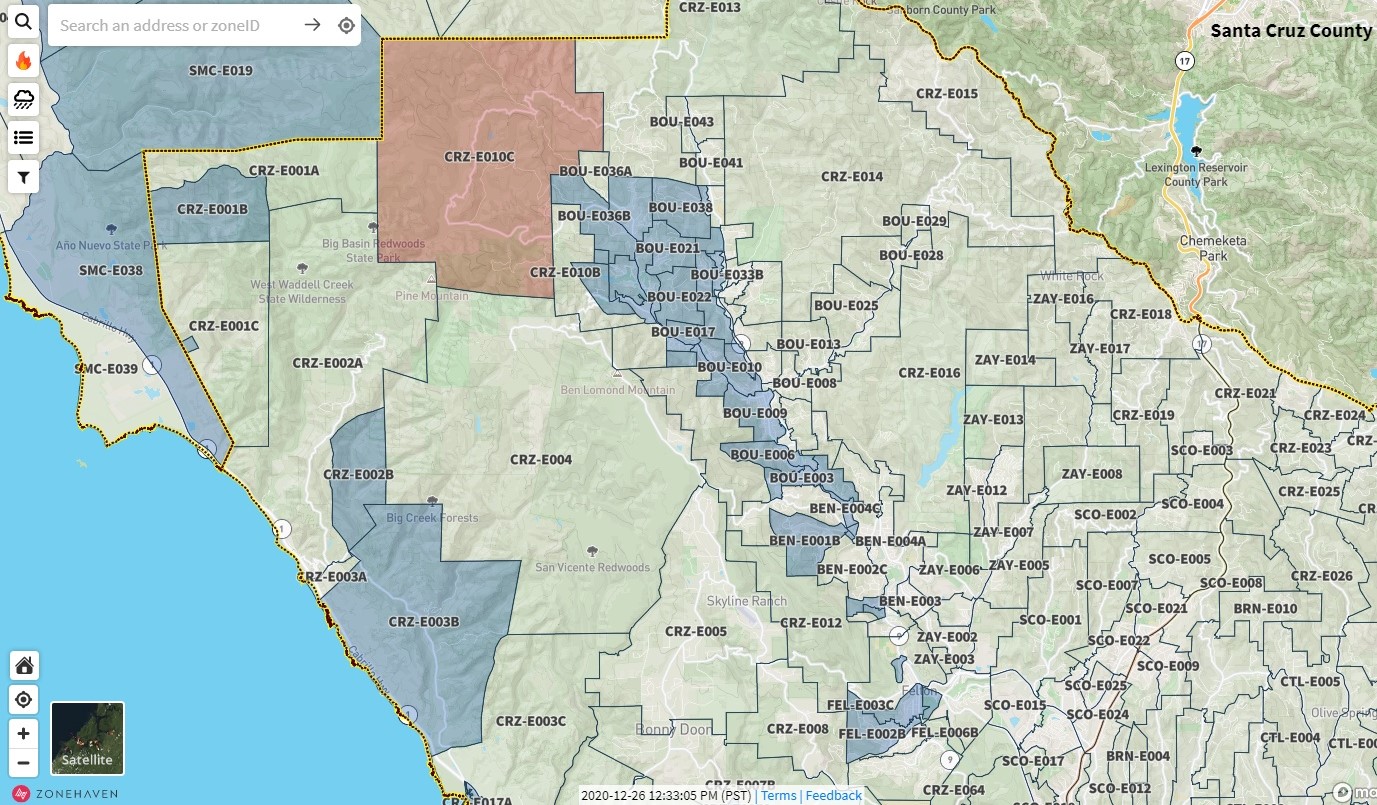 Jason Hoppin, Communications Manager for Santa Cruz County, notes that the rains we’ve had so far this year are “beneficial rain events.” This means they’re enough moisture to encourage regrowth of seeds and damaged—but not destroyed—shrubs and trees, but not heavy enough to bring down our badly burned hillsides.

In conversations with Hoppins and Ashley Keehn, Public Information Officer for the Santa Cruz County Sheriff’s Department, we reviewed how local residents should prepare for possible evacuations later in the rainy season.

Evacuation zones will primarily be west of Highway 9. You can look up your zone at community.zonehaven.com. Some people have had problems with this site using the Safari browser. So, if you have another, use that. Enter your street address in the search box at the top left of the map. Click on the arrow, and you’ll see your zone. The number should look something like “BOU-E010” or “FEL-E002.” Clicking on your zone will show you whether it’s “normal” and unlikely to be evacuated, or “advisory” (in blue) and considered under hazard from debris flows. Only one zone shows up in red on the map. This is for mandatory evacuation.

However, in a recent Lompico Town Hall, Steve Wiesner, Assistant Director for Transportation and Roads, noted that county roads have been pretty badly damaged. Repairs will be costly and lengthy. So, in areas like Lompico and Zayante that have few roads in and out, it’s important to follow the same protocols during heavy storms, even if you’re not in a burn zone. As you may have noticed, the county has been working intensively throughout the mountains to make sure ditches are clear and railings are repaired. Wiesner also noted that some major evacuation routes have already been repaired using Measure D funds.

Find a place to stay and several evacuation routes. As everybody in the mountains knows, heavy rainfall can cause slides and slipouts that can block roads, even in a normal year. As Keehn says, “We will try to give warnings as early as we can when we see weather systems coming in that could meet the threshold for a mandatory evacuation. The goal is to give 24 hours notice before sending out a mandatory evacuation order.” Hoppin adds, “Don’t wait until mud is coming down the mountain. Leave while the roads are still dry and open.”

Hoppin also urges everybody to “be ready but not afraid.” Think about what you need to take, and make an evacuation checklist. The Santa Cruz County Office of Emergency Services has several good guides for lists and plans on their “Storm Preparedness” page. Then get everything together you can. Keep a “go bag” packed that you can grab and load easily. Pack important papers and photos in advance too. Put pet carriers and food somewhere you can easily locate.

Go to the Code Red website at tinyurl.com/y36azjvy and list all your contact information. It’s best to list as many ways to contact you as possible in case a storm knocks out power. Keehn notes, “You do not have to wait for a notice to leave if you sense danger. Some warning signs for debris flows include rushing water and signs of flowing mud.” The county also recommends keeping track of storms yourself using press reports, social media, weather websites, and emergency radios. Let neighbors know if you hear about warnings.

For more information, go to:

Chris Finnie has lived in the Santa Cruz Mountains for 25 years. She’s worked as a marketing copywriter for more than 35 years. And has been a local, state, and national political activist for 17 years. She has contributed articles and columns to several local newspapers before happily landing at the San Lorenzo Valley Post at its inception.