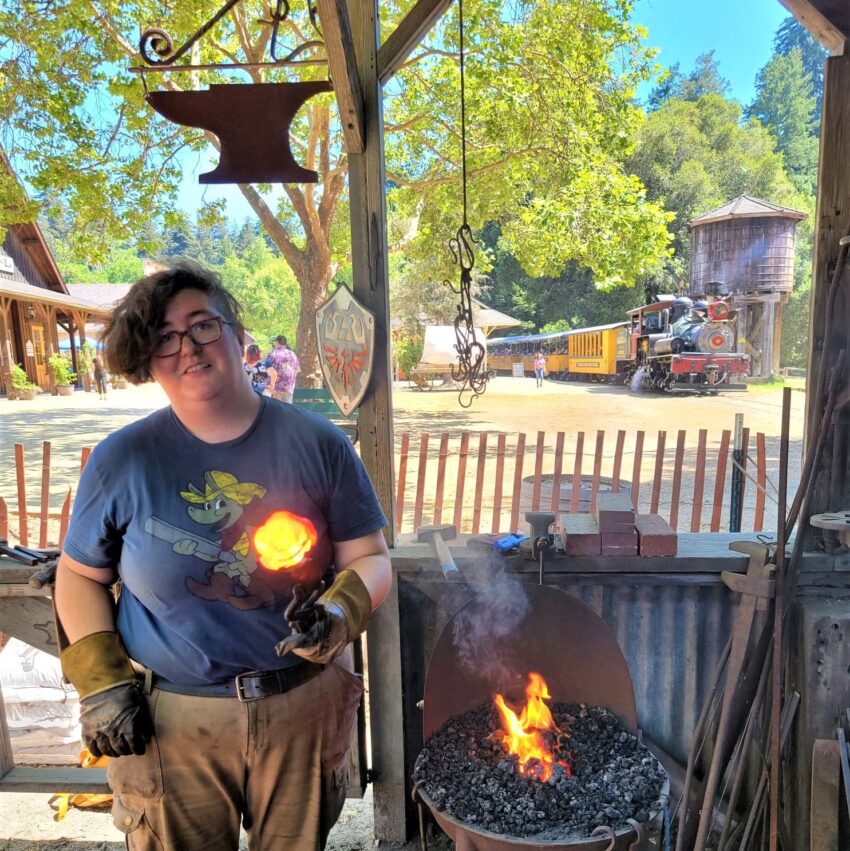 Anna Bobisuthi is a blacksmith and fabricator who creates art from steel, her hammer ringing clear and strong beneath the redwoods at Roaring Camp Railroads. The Boulder Creek native said, “I first started blacksmithing when I was 12, learning from books and then from YouTube.” Honing her skills first from a traditional fired forge and then from a propane forge in the family’s backyard, Anna came under the tutelage of Frank Golding, Roaring Camp’s regular blacksmith. She and Golding now share weekend duty at the blacksmith shop in the shade of the oaks at Roaring Camp’s old-time train depot.

Bobisuthi works with metal heated to 1,600 to 2,000 degrees Fahrenheit in the Roaring Camp coal-fired forge. She can tell the temperature of the material when it starts to glow bright orange or yellow. She said, “When the metal is that hot, it’s like clay or playdough.” That’s when things begin to take shape using an array of hand tools, molds, vices, and an anvil.

Fascinated by alternative art forms, diverse cultures, cosplay, and gaming from an early age, Bobisuthi grew up in the San Lorenzo Valley Charter 25 Homeschool program, which allowed her to do art and blacksmithing any time she wanted to, she said. “I credit my parents for always being supportive.” The youngest of five gifted kids, she started taking classes at Cabrillo at age 14. She studied Japanese language, culture, and art, got her AA degree, then transferred to the University of Iceland where she won artistic cosplay costume awards and studied Japanese and Chinese languages. “I’ve been fascinated by Asian culture since I was a kid,” she said. “I wanted to play video games and fell in love with the language.” Winning a MEXT Research Scholarship to Ritsumeikan University in Kyoto, Japan, she was able to drill deeper into the urge to work with steel. “I’m really into swords and armor,” she said, and she found the history of Japanese armor from the Sengoku and Edo periods in Japan especially interesting; how the armor evolved from an instrument of practical use in war to one of decoration. “There were all these crazy intricate designs, really amazing shapes, fantastical armors because you didn’t have to actually wear it.”

Big into Dungeons and Dragons, Bobisuthi works full time as a blacksmith and fabrication artist and has added high-tech tools to her arsenal. “I used to do a lot of stuff by hand,” she said. Now she has the option to use a hand-held plasma cutter, which uses electricity and forced air to melt metal; or she can push a button on the CNC Plasma Table to make blanks first, adding details later in the blacksmith shop. She can use the 3D printer to cast to metal, aluminum, bronze, brass, or silver, even combine plastic with metal. Her favorite element is steel. “It’s so versatile, there are so many things you can do with it. If you want something heavy like a sword, or you can do lighter things.”

You can also paint with fire using the torch. “Depending on how hot the metal gets, there’s a whole spectrum of colors from brown to purples, red, orange, yellow, and then to black. The trick is to stop before you get the color you want because the metal is still hot…like food will continue to cook even after you take it off the heat.”

Part of the passion is teaching people how to do blacksmithing, especially girls and women, she said. “You don’t have to be big and strong to do blacksmithing. You can start out with a smaller hammer to build up your technique and your muscles. Anyone can do it.” And she said this lost art has seen a major resurgence through YouTube and online classes from the California Blacksmith Association (CBA). “There are a fair number of blacksmiths in Santa Cruz County. It’s never been easier to learn.”

Anna Bobisuthi will be one of 50 blacksmiths demonstrating their skills and hosting workshops at the 5th Annual Roaring Camp Hammer-In August 19 through 21, 2022 from 9:00 am to 5:30 pm. Meet Anna Bobisuthi in person at Roaring Camp Sundays from 10:00 am to 3:30 pm.