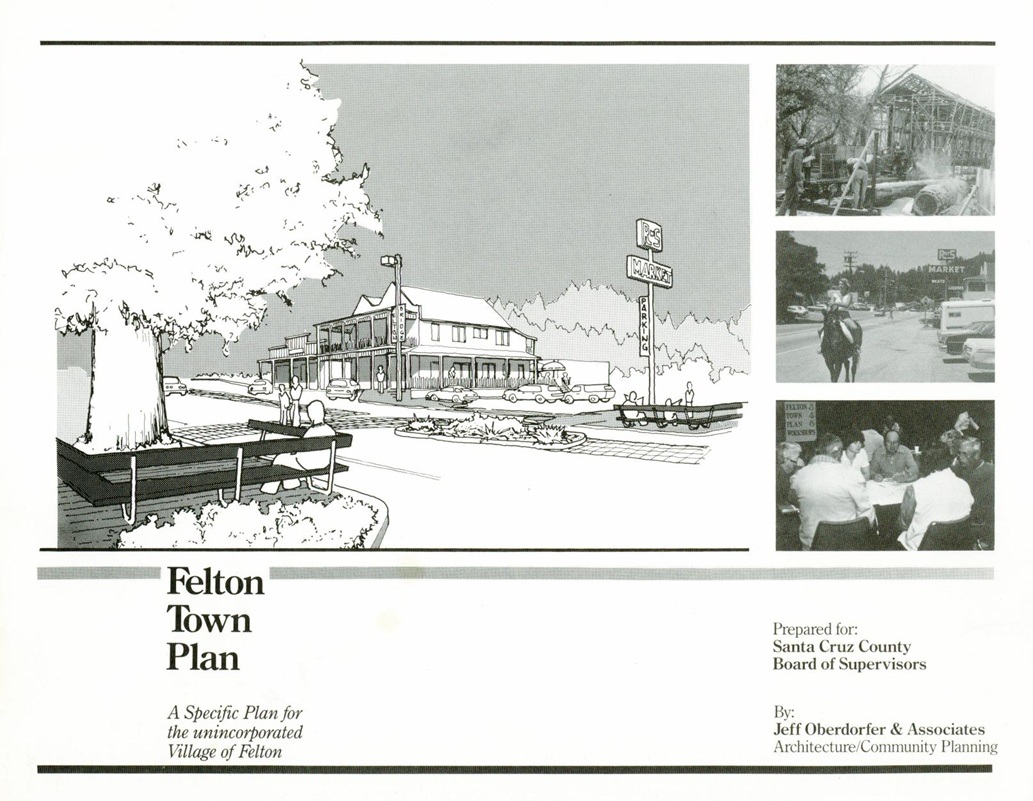 I like the finality of a year-end wrap-up. But some years can’t be wrapped up neatly with a bow. Making measurable progress means setting some goals. The last time San Lorenzo Valley did that in a formal way was during the development of Village Design Plans for the Valley’s towns back in the late 1980s and early ‘90s.

To understand what progress we’ve made and how our current efforts compare, I started with the Felton, Ben Lomond, and Boulder Creek Town Plans to see how SLV residents historically categorized their needs and what the County’s vision was for achieving them.

Those documents did lead to measurable improvements — Covered Bridge Park’s “tot lot” and many pedestrian safety improvements along Highway 9 are two examples.

Though the more things change, the more they stay the same based on a pair of conflicting town goals for Felton in the ‘90s-era plan. “Bring tourists into town,” reads one comment. Below it the next one says, ”Minimize tourists in town.”

The Town Plans were prepared in accordance with the 1980 General Plan, which called for Design Plans for communities in unincorporated portions of the County. These were visions of livability for the locals — pedestrian safety improvements, underground utility districts, and community park improvements.

But under-investing in infrastructure continued to be a theme in Santa Cruz County — as it has in most of the country. When the SLV Water District Board (of which I am a current member) sold land in Waterman’s Gap to the Sempervirens Fund in 2000, it might have used the revenue to make capital improvements. It didn’t and those subsequently languished.

Residents continue to request solutions that include putting power lines in the ground in our forested mountain communities including the undergrounding of utilities.

Much has been written about the steps the County has taken to try to streamline their fire recovery process with limited success. But the decision to allow fire families who may be living in temporary housing to more quickly get back onto their property by building accessory dwelling units (ADUs) offers hope for families losing insurance rental benefits in the coming months. Community Bridges, the nonprofit I work for, through Mountain Community Resources in Felton continues working with fire families to help them navigate challenges through legal resources, case management, advocacy, and grants.

For context, the last major water supply project was done the year I was born. My oldest daughter — an SLV graduate — is now getting her masters.

SLV’s water district has the funding to complete fire recovery thanks to a recent surcharge. But the additional funding needed to complete decades of future capital work still have to be identified. At the same time, the District is taking on mergers with heavily damaged smaller water systems in Boulder Creek. That will mean more strain on the District’s limited staff resources regardless of whether the state provides funding to restore those systems.

The pace of progress has been slow in SLV. It will take a unified effort to bring more visibility and resources to the Valley’s needs in the coming years. It shouldn’t be another 30 years before we create our next Valley Plan.

Jayme Ackemann is a public affairs consultant and freelance writer. She has worked on major capital investments and water infrastructure construction projects in the Bay Area. Jayme is a long-time resident of Ben Lomond.